For too long, nonprofits have been overlooked and undervalued for all they do to strengthen communities, to address the issues others can’t or won’t, or, for that matter, to drive a major piece of our economy.

How Philanthropic Collaborations Succeed, and Why They Fail
Source:
SSIR
Published:
Wednesday, July 10, 2019

For more than a century, donors have pooled their resources to create change through community foundations and organizations like United Way Worldwide, immigrant mutual aid societies, and faith-based giving circles.

Charities feared that the 2017 tax law would lead to a drop in charitable giving by individuals. The chief reason: the doubling of the standard deduction would mean it wouldn’t pay for many to itemize on their 2018 tax returns, and without a charitable contribution deduction, they’d be less inclined to give.

The Privilege and Peril of Becoming a Foundation CEO
Source:
Philantopic
Published:
Thursday, May 02, 2019

To truly do justice to the position, the leader of a foundation should not only be able to articulate a vision, inspire confidence, and exemplify other classic qualities of leadership, s/he should also have the strength of character to manifest the unique values that characterize philanthropy at its best.

Four successful strategies to mitigate the effects of a restrictive funding policy that the Trump administration reinstated.

In early September, the Impact Investing Forum held a hybrid meeting focused on housing investment strategies. The quarterly Forum provides a peer space for Philanthropy Colorado members interested in sharing and learning about investments intended to create a beneficial social or environmental impact along with a financial return. 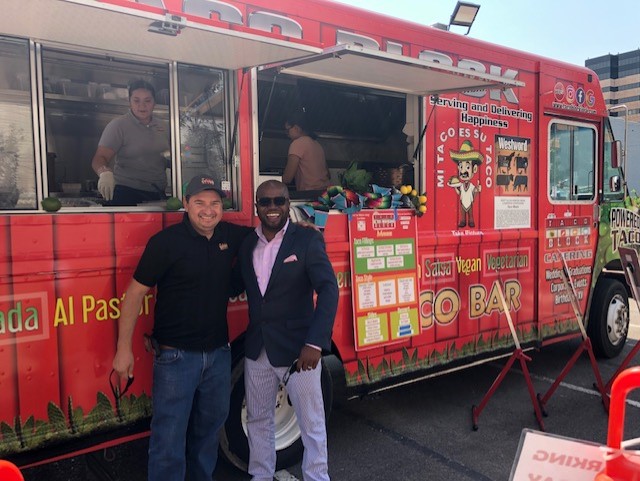 The funder group and visitors discussed various opportunities to provide capital and guarantees to support affordable housing development, as well as a coming ballot measure that would establish a permanent revenue stream for affordable and accessible housing in Colorado. 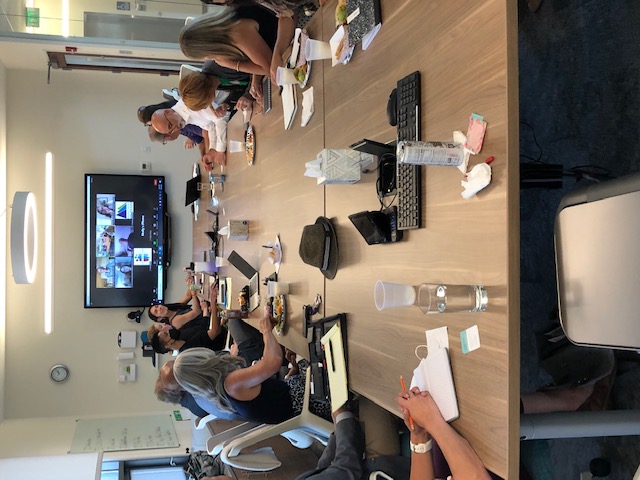 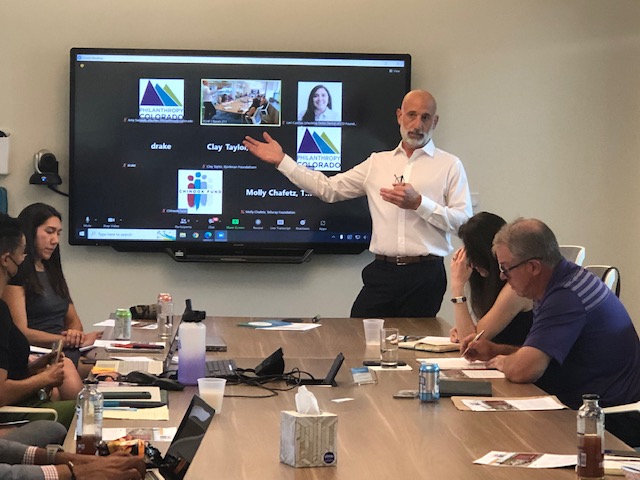 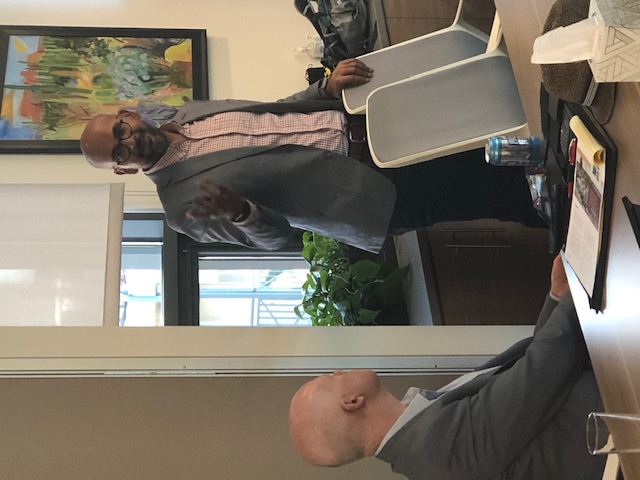 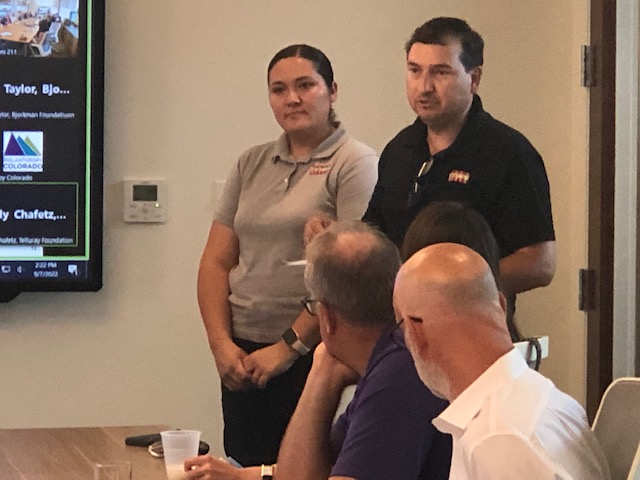 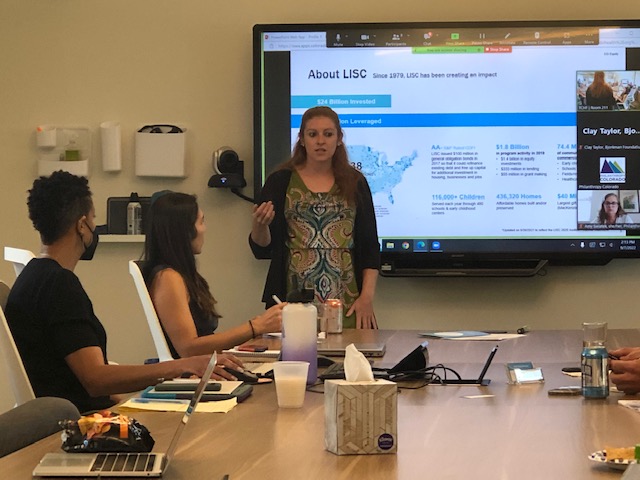 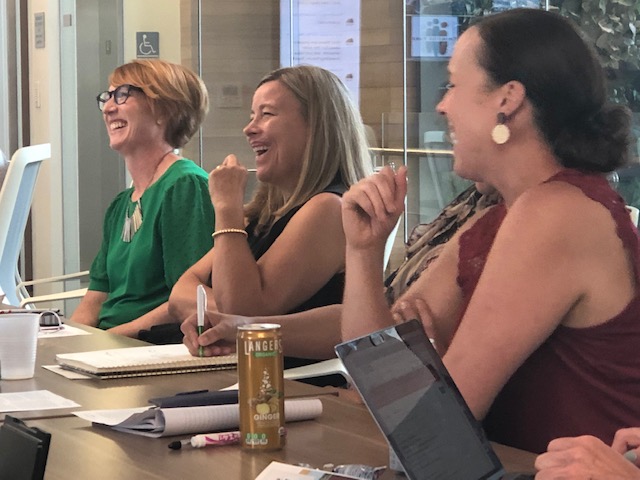 While excited by the featured housing projects, a key concern was how to accelerate the pace and scope of new affordable housing developments, which fall well short of the need in our state. 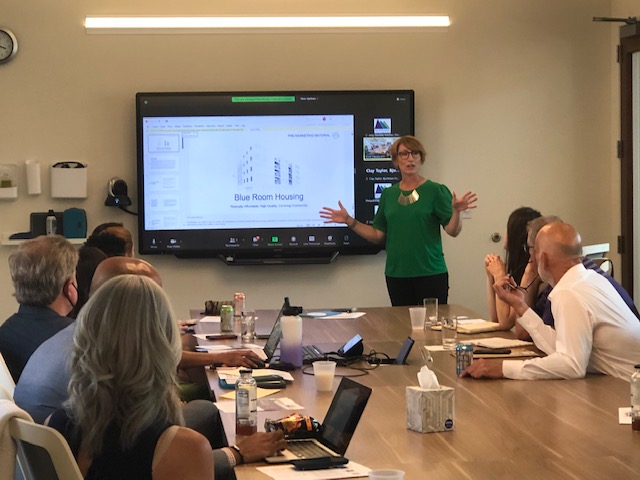 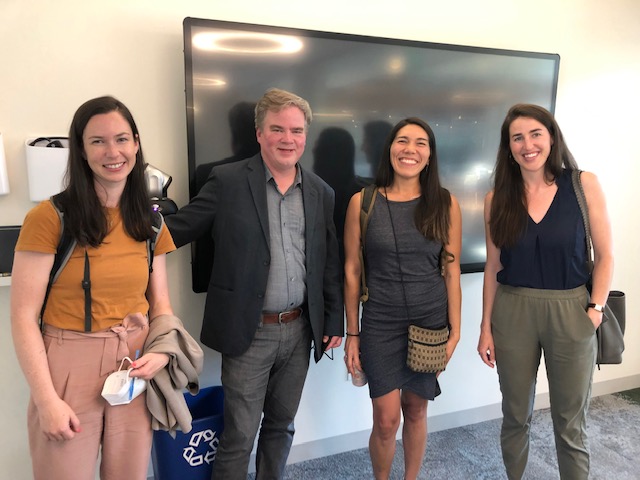 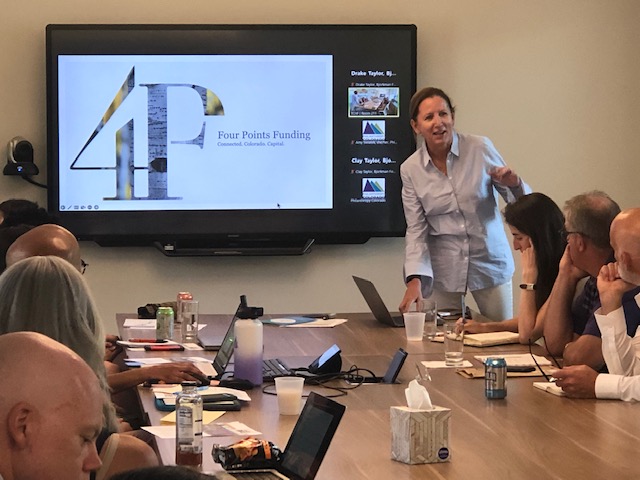 University of Colorado at Denver Public Affairs professor Todd Ely talks about his new Foundations of Colorado report in this exclusive Q&A. 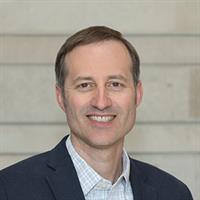 Q: What was something in the results that surprised you?

Response:
Geography of grantmaking: While I knew a foundation’s location is tied to the geographic focus of giving, I was surprised to find that Colorado grantees received more than 77% of grants and 73% of grant dollars from the state’s largest foundations. This share of giving remaining local is higher than numbers I’ve seen in other places. Many of Colorado’s foundations, like the Robert Hoag Rawlings Foundation of Pueblo or The Outcalt Foundation based in Alamosa, are tightly linked geographically to the work they do. More than half of the largest 100 foundations primarily or almost exclusively make grants to Colorado recipients (more than 79% of total grant dollars).

Alternatives to traditional grantmaking remain relatively rare: Although still fairly uncommon, some of Colorado’s foundations engage in alternatives to traditional grantmaking that include Program-Related Investments (PRIs) and Mission Related Investments (MRIs), as well as screening of endowment investments for environmental, social, and governance (ESG) considerations. These practices to leverage assets beyond annual payouts are extremely promising, but the additional capacity required may limit broader adoption without creative supports.

Q: What are a few key takeaways for the foundation community?

Response:
Publicly available data allow us to consider Colorado’s foundations on a number of meaningful dimensions including how they compare nationally, the concentration of assets, grantmaking patterns, payout rates, estimated economic impact, transparency, and innovative practices. We hope that the information provides some new insights into foundation activity for those doing the work on a daily basis, while also helping to educate the public about foundations.

Grantmaking patterns: The study used IRS filings to compile nearly 10,000 individual grants made in a single year by Colorado’s 100 largest nonoperating private foundations. The most common grant amount was $10,000, while the average grant amount exceeded $50,000. The variation in giving patterns across foundations is striking with the median foundation making only 36 grants in a year, but the number of grants made ranging from only 1 to a high of 2,248.

Q: The report is intended to inform the public about Colorado grantmaking. How can Philanthropy Colorado and our foundation members build on that goal?

Response:
Reporting on grantmaking activity by the numbers is a start but tells us little about the effectiveness of foundation activities in Colorado. During our study, we saw examples of impact reporting that begin to demonstrate the outcomes of foundation grantmaking but showcasing the successes and failures of grantmaking to the public may require more storytelling than just numbers. Opportunities include the need for in-depth case studies that tell the stories of Colorado’s foundations for a public audience.

Foundations remain a mystery to many. While this might be preferred by some foundations, improved transparency has the potential to improve public trust, collaboration among peers, learning about promising practices, and connections with grantees. We found more than half of Colorado’s largest non-operating foundations host websites, although the comprehensiveness of information provided varies widely.

READ MORE ABOUT THE REPORT AND KEY FINDINGS

The report was supported through the University of Colorado Denver’s Presidential Initiative on Urban and Place-Based Research to examine the activity of Colorado’s private grantmaking foundations. The goals of the project were to document the foundation landscape in Colorado, including the characteristics of foundations and patterns in grantmaking, and to highlight how foundations leverage assets for social impact.

Todd Ely explains, “The hope is that the project can help inform the public and stakeholders about Colorado’s non-operating private foundations and bring light to organizations that are often poorly understood both in their origins and activities.”

Report findings about private non-operating foundations in Colorado include:

Full Report here
Monday, August 29, 2022
Find More By
News type
Giving Voice Blog
Over twenty-five individuals from Colorado foundation and state funder organizations joined Philanthropy Colorado for a visit to the San Luis Valley (SLV) in mid-August. The SLV visit is part of Philanthropy Colorado’s on-going efforts to facilitate meaningful relationships between funders and rural communities in our state. Multi-day visits allow current and potential funders to better understand how philanthropy can best partner with these communities. The event was organized in partnership with the co-chairs of Philanthropy Colorado’s Rural Funders Learning Network (RFLN) Advisory Committee, Amy Latham with the Colorado Health Foundation and Tony Lewis with the Donnell-Kay Foundation, and the Community Foundation of the San Luis Valley. 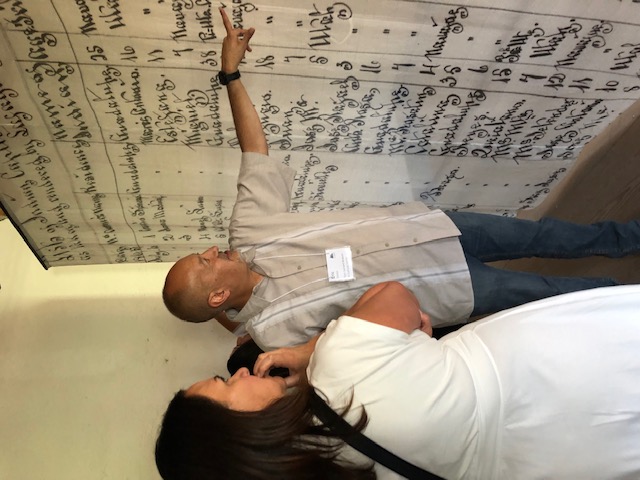 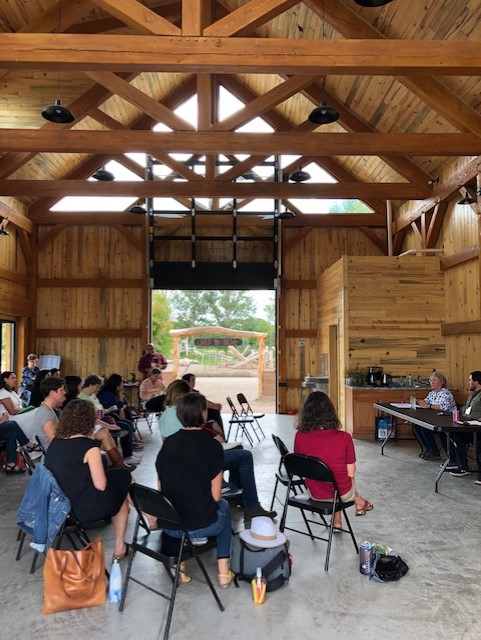 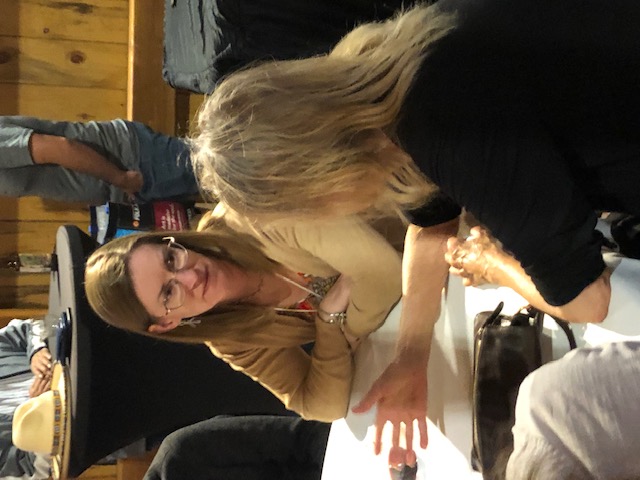 Funders had the opportunity to visit a variety of locations in the valley, including:

Most importantly, the visit allowed grantmakers to meet face-to-face and break bread with community members, organizations and local leaders. The conversations deepened our understanding of the history and culture of the valley, effective philanthropy, key community assets and challenges, and current and emerging local projects. Funders valued the opportunity to enjoy the diversity and beauty of the San Luis Valley communities for themselves – and to eat lots of great local food.

Local band at The Barn 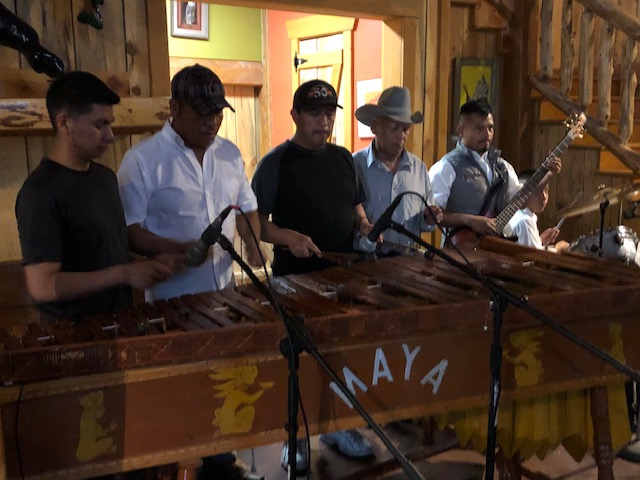 These visits are the r 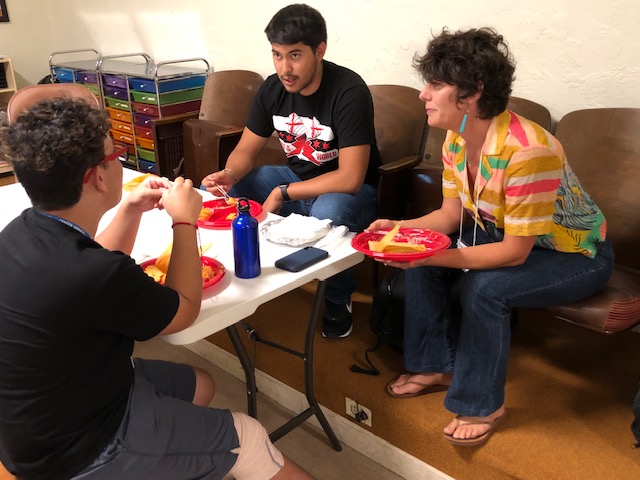 esult of significant planning and networking, driven by the RFLN Advisory Committee. The many months of relationship-building and development that went into the SLV trip were evident in the authentic, rich conversations and sharing between our SLV community hosts and visiting grantmakers. Philanthropy Colorado's Rural and Statewide Director Amy Swiatek explains “We have built a relationship with the Community Foundation of the San Luis Valley to better understand their work and priorities and to re-ignite an SLV funder cohort to better align resources, connections and understanding of each other’s work.”

Funders gather at a local restaurant to hear from community leaders 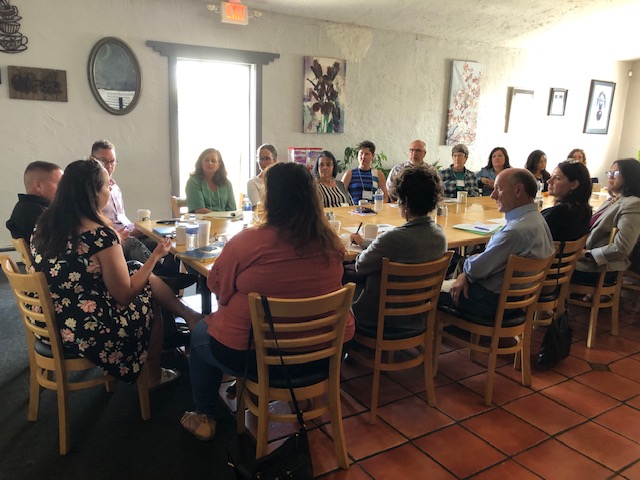 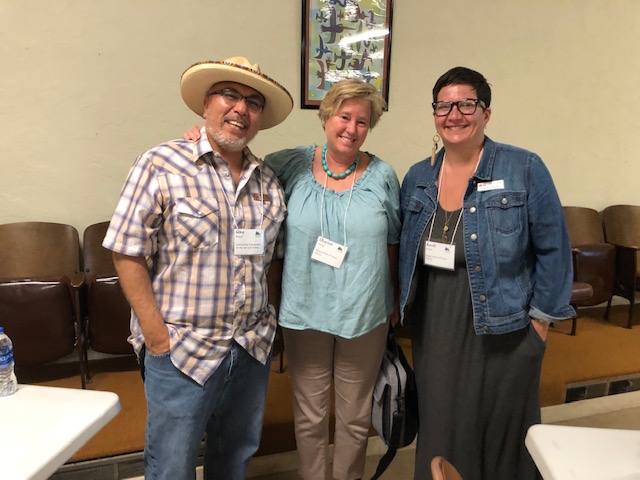 Some of the issues discussed include transforming food consumption in the valley by restoring healthier heritage foods, developing local and inclusive leadership, supporting youth engagement and entrepreneurship, saving historic structures, expanding affordable and attainable housing, balancing recreation and environmental preservation, and strengthening local economies. Amy adds, “We look forward to deeper investment and collaboration in support of the people of the San Luis Valley as a result of these continuing efforts. Onward!”

If you would like to become more engaged with Philanthropy Colorado’s Rural Funders Learning Network, contact Rural and Statewide Director Amy Swiatek.

Inside the Center Theater undergoing rennovations 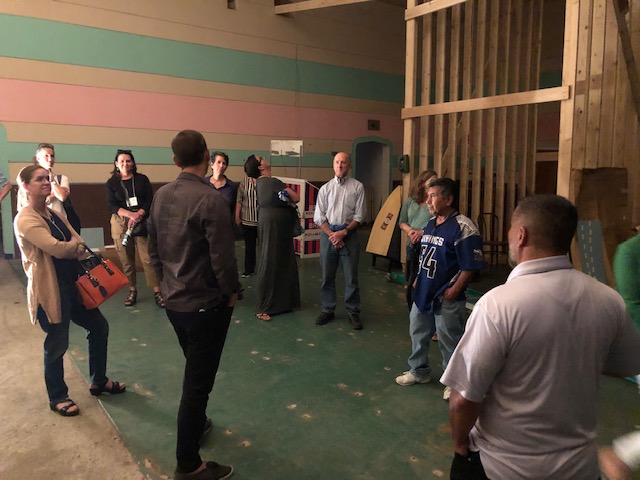 Philanthropy Colorado is highlighting efforts to Reshape Housing Affordability and Sustainability in Colorado, including a discussion this week on housing policy take-aways from the last legislative session and of a current state ballot proposal on dedicated funding for affordable housing.

At our coming housing program, Mike Johnson and his team from Gary Community Ventures will share their work on Colorado Ballot Proposal 2021-2022 #108 – Dedicated State Income Tax Revenue for Affordable Housing Programs. The funding proposal would create a state affordable housing fund supported by one-tenth of one percent (one penny on every $10.00) of individual and corporate federal taxable income. The proposal is currently in the signature collection process, with a deadline of August 8, 2022.

An $88 billion dollar investment supporting economic opportunity for minority and low-income individuals and communities is the commitment made in PNC’s Community Benefits Plan. The Community Benefits Plan reflects PNC's commitment to addressing systemic racism, promoting social justice and advancing diversity and inclusion within PNC and the broader financial system.

Ellen Sandberg, Vice President of Community Development Banking in Colorado and New Mexico (and a Philanthropy Colorado board member and co-chair of our Equity Committee), shares more about how their Community Benefits Plan will impact their Colorado giving portfolio. 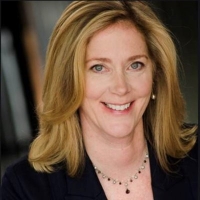 “I’m honored to take on a new grant making role at PNC Bank in Colorado focused on affordable housing and small business support. Colorado’s affordable housing and economic development non-profit organizations and Community Development Financial Institutions will be my key partners to help PNC carry out our national $88 Community Benefits Plan that features loans, investments, and other financial support to bolster economic opportunity for low- and moderate-income individuals and communities, people and communities of color, and other underserved individuals and communities over a four-year period beginning Jan. 1, 2022.”

Ellen is featured on Philanthropy Colorado’s current Member Spotlight (scroll down to read Spotlight), where she comments on the value of membership.
"Being a member of Philanthropy Colorado is an important way for PNC and me to stay connected with fellow funders and emerging philanthropic issues in the state. I also recommend joining the peer learning networks to explore issues with colleagues, from arts to early childhood and the needs of Colorado's rural communities."